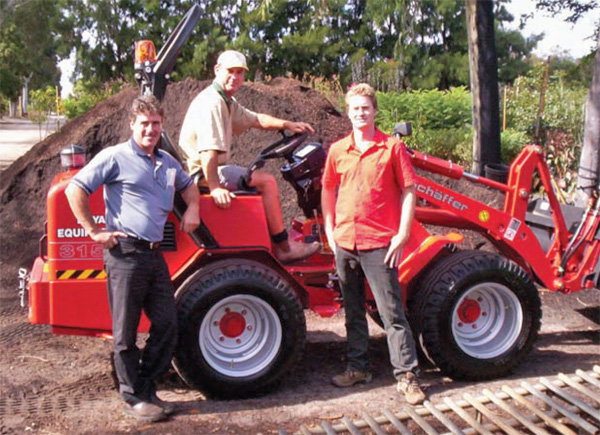 Shady trees can make a garden of Eden from a sandpatch - and people like property developers and councils often want instant results. That's why the proprietor of Western Australia's Ellenby Tree Farm, David Woodroofe, pioneered the advanced tree industry some 25 years ago to become Western Australia's largest specialist tree nursery.

Until recently, the task of loading large trees onto trucks was carried out by a fleet of tractors with a bucket loading mechanism attached but David says it was becoming increasingly apparent that this method was less than satisfactory. "We were spending a lot of time repairing the front axles of the tractors," he says. David decided it was time to change to a compact articulated loader more suited to the task. Having seen a demonstration of the Schaffer when the loaders first arrived in Australia, he chose the Schaffer 3150.

This is Schaffer's best-selling model, which is extensively used in landscaping and horticulture businesses. "It has a short mast, good stability and is ideal for manoeuvring around the nursery. It fits into spaces where you don't think it would fit," he says.

David had a special "carry-all" loading platform made and says it has halved loading time and boosted profitability. "It's very quick, very nimble and has a huge capacity. Instead of tying up three people for an hour, it's now half an hour," he says. "Instead of loading six trees we now load 18 in one hit."

On top of loading duties, David also runs an auger to drill holes and uses the bucket and forklift for various jobs around the nursery.

He says he is so impressed with his Schaffer 3150 articulated loader, he is planning to replace his entire tractor fleet as soon as he is able.